Penang has the most wonderful mix of cultures, consisting primarily of Malay, Chinese, and Indian. But, there's a diverse mix of other influences as well, and the result is a complex and vibrant place. In George Town, on Penang Island, you can find a Thai Buddhist Temple with an incredibly large statue of a Reclining Buddha, the third largest of its kind in the world… 33 meters long.

Directly across the street, almost as if in competition, there is a Burmese Buddhist Temple, known for its complement of Standing Buddhas. The gardens around the Burmese temple are filled with interesting art and sculpture, such as this Naga, a dragon in Buddhist mythology.

I had the opportunity to explore these two temples and more today, thanks to a local colleague and his wife who were kind enough to spend the day showing me around. Look for more pictures over the next several days, as I get a chance to post them! 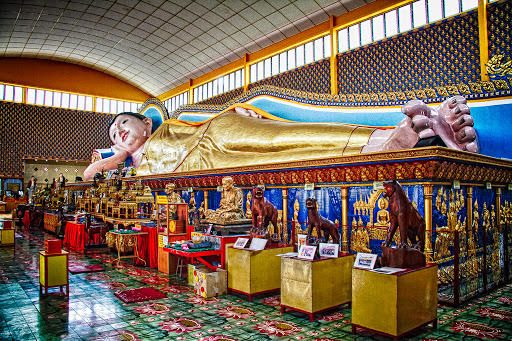 This entry was posted in General, Photography and tagged Google+.