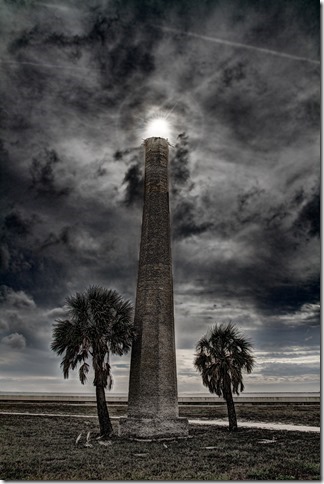 On a recent trip to one of my favorite local places, Fort Desoto, I had my camera – but the light and wildlife weren’t cooperating. Or so I thought. It was an overcast day, and the sun somehow managed to beat down yet remain mostly hidden behind the cloud cover.

I was walking out towards the fishing pier, and spotted this old lookout tower near the fort. I’ve seen this before, but it never inspired me. However, on this day, I suddenly got the idea to hike over and set up my tripod such that the sun was positioned directly atop the tower.

Some folks who’ve seen this image have evoked hints of Middle Earth, or Stephen King’s Dark Tower. That’s powerful, and I couldn’t ask for a better response to my experiment! I really like the results, and I plan to work a little more with this image, as well as this concept in general. It certainly seems a good way to make use of the less than favorable sunlight when there is a layer of clouds in the sky and everything appears gray.

This entry was posted in Photography and tagged Clouds, Fort DeSoto, Sun, Tower.